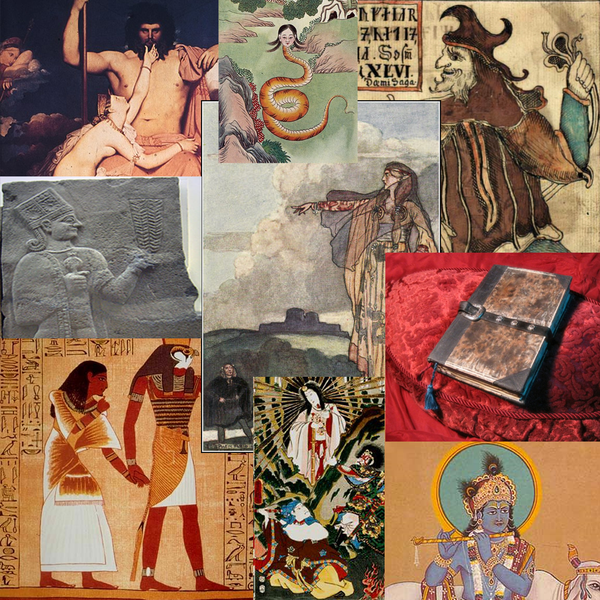 The term “myth” is used to categorize a particular event that usually takes place during the early stages of a civilization. More often than not, a time when record keeping was absent. Typically these stories involved divine beings performing hard to explain tasks. By the time some of these stories were recorded, they already underwent many changes. Many generations of storytelling was the main contributor to these changes. Thankfully we have access to the sources of these myths, the most ancient of mythologies. Aside from these tales, religion also plays an important role. Many consider religion and myth as pure fiction, while others say they go hand in hand with history. So how does it all fit together?

Across the world we’ve discovered evidence of various ancient mythologies. Whether in the form of text or archaeological evidence, every habitable continent has their own mythologies. Many consider the oldest to be Sumerian, Egyptian and Hindu. While it is up for debate as to who preceded who, those presenting evidence typically do so with a biased view. Regardless, we continue to discover more ancient sites that predate these civilizations. Perhaps we’ll discover more ancient mythologies as well.

Some mythologies, such as Norse, are a collection of stories ranging from a time that isn’t considered “ancient” by definition. While these stories do relate to their more ancient counterparts, much of the writings consist of fables and folklore. The Icelandic Sagas were only recorded as early as 800CE – 900CE, and most of the stories much later. Myths traveled from Germanic tribes, as early as 300BCE and spread north. 1000-1400 years of tribe to tribe, generation to generation storytelling. Its no wonder these stories contain so much less context and meaning than their older counterparts.

The majority of old belief systems were pagan or polytheistic in nature. Eventually the rise of new monotheistic beliefs would challenge these old ways. These new beliefs became known as religions while the older systems received the label and negative connotation of a myth. While many assume these 2 categories are completely separate, they frequently intersect and reinforce one another. The Bible has many references to mythological beasts of Greek origin. While on the other hand Greek myths share many components that we find in the bible. One example being the Snake who guards the magical tree which bares magical fruit as mentioned in the Theogony. Mythology and religion are no different from each other. In fact, religion was born from mythology, and mythology blended into religion today.

Myth and Religion vs History

As mentioned, myth and religion go hand in hand. But do they align with historical record? It is quite possible to pick any mythology or religion and find some sort of historical accuracy contained in its writings. Time and time again we use ancient sources to uncover buried or lost cities. We can also trace empires and wars influenced by the wars between the gods. By referencing a quote from Thallus that Belus of Assyria assisted Cronus against Zeus, we can make a startling conclusion. The date coincides perfectly with the recording of the Hittite tale The Kumarbi Cycle (1500BCE). This tale’s counterpart of Zeus gained supremacy over his father. The rise of the Hittite Empire reflects the war between the Olympians and the Titans. It all takes place at the same time, in the same location, and recorded from multiple perspectives. This is one of many examples of myth and religion overlapping into history. It appears that we can always prove myth and religion right, yet never prove them wrong.

Pieces of a Puzzle?

Even now, mankind maintains separation between religion, myth, and history. How are we able to find the truth if we only consider a fraction of the sources? Whether blinded by faith, science, or any bias, we need to recognize these subjects for what they are. Misunderstood, misinterpreted, and somewhat lost in time, these stories are all part of a single picture. A puzzle that we call the past, and each piece being a historical, religious, or mythological record.

Depending on one’s beliefs, they may discredit history and gravitate towards religious or mythological writings. However, some put their trust in historical record. Very seldom does someone consider the information in all three as valid. Only by considering all of the sources can we begin to put aside our differences and find the answers together. Why is it even relevant today? In a world that seems to be in an “alea iacta est” situation, insight on what comes next would be helpful. If history repeats itself, it only makes sense to look into the past to find what the future holds.